Goji Berry Benefits - why they are so good for you 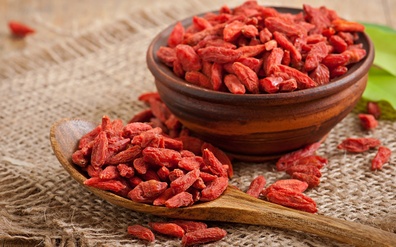 Like many ancient fruits, goji berries have a long reaching list of reported health benefits. They have been wide touted as one of nature’s superfoods with the ability to make a real difference to people’s health.

At the same time, there are some people that are less enamoured with this little red berry and the primary reason for this is that goji berries are part of the nightshade family of plants. Therefore, while in this article we will explore the many health benefits of goji berries, those people who are sensitive to nightshade produce, should be cautious of consuming goji berries until they have established how their bodies reacts.

The following paragraphs outline some of the reported benefits of goji berries and their possible applications to improving a person’s health.

It is rare that one tiny fruit contains so many vitamins, phyto-nutrients and amino acids which is probably why it has been named a superfood. Given their small size and weight goji berries have one of the highest concentrations of vitamin A in a fruit. In addition the berries are a good source of vitamin B1, B2, B6 and E. Goji berries contain more iron than spinach in terms of weight as well as more than 21 other trace minerals and 18 different amino acids. This means that just a small helping of goji berries can help boost your nutrient intake quite significantly.

In a world where we are exposed to so many stresses, toxins and environmental hazards, health conscious people are always looking for foods that help the body detox and fight off disease. Goji berries have been the subject of several studies relating to cancer particularly because of their antioxidant capabilities.

Goji berries contain phytonutrients that have shown to have a possible impact on certain cancer cells with the ability to cause cell arrest thus reducing the spread of cancer cells. In other studies, Traditional Chinese Medicine which includes the use of goji berries shows a positive impact when used in conjuction with radiation therapy.

Anti-aging is often linked to oxidative stress and foods that have shown to reduce this can have an impact on the appearance of aging. Due to their strong anti-oxidant properties, goji berries are believed to have a positive impact on anti-aging.

Because of their high nutrient value and antioxidant properties, goji berries have shown to have a protective effect on exercise oxidative stress. This is good news for athletes who enjoy goji berries in a smoothie or as part of their breakfast meal.

Preliminary studies have also shown that active ingredients such as those found in fruits like goji berries or blueberries may be used to supplement and enhance stem cell activity.While these are preliminary findings it highlights once again the active role that foods can play in healing and medicine.

Lycium barbarium polysaccharide found in goji berries has been studied with regards to protecting the liver against fatty liver disease . The study conducted on mice showed that those consuming LBP maintained lower overall fat weights and liver weights. While further studies are needed to confirm these results, researchers are excited about the possibilities.

Impact on diabetes and vision loss

Goji berries have relatively low levels of sugar compared to most other fruits. This combined with the many nutrients they contain has lead researchers to study if goji berries may have a regulating or lowering effect on blood glucose levels.

A study relating to diabetes and metabolic syndrome showed that the polysaccharides in goji berries had several positive impacts on obesity, blood serum levels, triglycerides and blood glucose. In addition goji berries appeared to help reduce weight and plasma insulin levels. Another study showed that goji berries may have a regulating effect on blood glucose levels.

One of the side effects of diabetes can be loss of vision. In a study relating to goji berries, diabetes and retinopathy, the fruit showed to have a protective effect against macular aging. As further studies are conducted it may show many additional benefits of the nutrient rich goji berries.

While no modern scientific studies have been published on the subject, herbal journals report that goji berries can increase virility and fertility, particularly in men.  Effectiveness may even be increased when combined with other herbs such as ginseng.

In preliminary studies conducted on rats, goji berry extracts have shown to have some neuroprotective  properties, with the ability to repair some memory loss and reduce oxidative stress.

In an additional study, Goji berries were studied in conjuction with their impact on ischemic stroke – a condition that accounts for a large percentage of deaths in the modern world. The Lyceium barbarum polysaccharides showed to have positive indicators of having neuro-protective properties particularly relating to cases of ischemic strokes.

As goji berries are researched further, it is quite possible that more health benefits may be confirmed or discovered. For now, there is enough evidence to encourage people to use goji berries to increase their nutrient intake and enjoy the associated health benefits.