Who knew Pineapple could be this powerful? 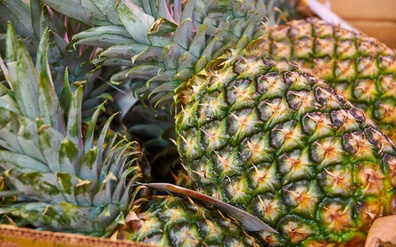 The core of the pineapple holds a wonderful secret for those interested in natural therapies and holds great promise for further research of cancer treatments. Even more interesting is that this little secret is not new. It has been reported on since the 1970’s and been used as part of traditional medicine in tropical regions for centuries.

Bromelain – at the core of the pineapple’s health promoting properties

The secret ingredient in pineapple is an enzyme known as bromelain, which found in the core or stem of the pineapple. This enzyme is quite the powerhouse in terms of helping the body to heal. According to a study review conducted in 1988 by SJ Taussic and S Batkin, bromelain is reported to have properties that include:

How bromelain became important in pharmacology and cancer treatments

SJ Taussic was one of the pioneers involved in researching bromelain extracted from pineapple as a treatment therapy for cancer and other conditions. In the 1970’s and 80’s Taussic was involved in several studies specifically on bromelain. By the late 1980’s research was showing promising results in cancer therapies.

In August 2001 HR Maurer published a paper titled: Bromelain: biochemistry, pharmacology and medicinal use. It’s makes interesting reading as it expounds on successful results using bromelain to treat a number of health issues. While it determines that further studies are required it refutes claims that bromelain is ineffective.

Bromelain versus chemotherapy – which improves chances of recovery?

A study conducted in 2007 once again shone the spotlight on bromelain. In this particular study the effectiveness of bromelin extract was compared to a commonly used chemotherapy drug known as 5-flouracil (5FU). The two therapies were tested on a number of different tumor lines including MB-f10 melanoma; Lewis lung carcinoma(LLC); Ehrlich ascitic tumor (EAT); sarcoma (s-37); and P-388 leukemia.

The interesting thing is the control that was used to test the effectiveness of bromelain. At the time 5-FU was the recommended treatment protocol for these types of cancers. Yet it was not without side effects. Like many other types of chemo therapies 5-FU does not differentiate between cancer cells and healthy cells. In fact the material data safety sheet states that 5-FU is toxic to blood and can cause organ damage if used for a prolonged length of time. Just 7,5g dose of 5-FU could prove fatal to 50% of patients. These are not encouraging odds. Effectively this implies that the chemotherapy not only kills the cancer cells, but enough healthy cells to make recovery of good health difficult.

By comparison bromelain showed to be more effective in selectively killing off cancer cells while being three times safer for patients. It is the natural combination of compounds that is able to induce this programmed cell death in cancer cells. As advanced as modern medicine and research is, it is yet to achieve a similar selective cytotoxicity. By contrast, bromelain extract from a pineapple stem is increasingly showing positive results in inducing selective cytotoxicity in cancer cells.

Why bromelain continues to impress researchers in cancer studies

A study published in April 2013, looked at the cytotoxic effects of bromelain on human gastrointestinal carcinoma cells. The study results reflected that bromelain was effective in inducing selective cytotoxity in the cancer cells while having little or no impact on healthy cells. Does this mean that pineapple is an effective alternative treatment to cancer? It would appear that those researching bromelain are impressed enough with the results to consider it.

The problem with convention chemotherapy treatments are the side effects. The toxic nature of chemotherapy often leaves patients looking and feeling much worse. Medical professions cite a wide variety of reasons for this, and when the patient dies it’s said this is because it was an aggressive strain of cancer or chemo resistant. But what if that wasn’t the case at all? What if the chemotherapy was simply causing so much damage to the body that it had no way of recovering. With healthy cells being killed alongside cancer cells, how is the body supposed to heal?

Increasingly researchers are recognising the value of selective cytotoxic alternative treatments such as bromelain. By selectively inducing cell death in harmful cancer cells while leaving healthy cells unharmed, the body has a far greater chance of starting to heal itself. The other positive aspect of bromelain is that it is also anti-inflammatory which further helps to promote healing.

A study conducted in the Philippines with school children using canned pineapple reflected an improvement in general immunity and healthy weight gain in underweight children. Just 140g of canned pineapple showed that the duration and incidence of infection was lower. While further research is needed to corroborate these results, it does imply that pineapple can also have a preventative effect on health, helping to boost the body’s natural immunity.

Given the high incidence of cancer in people of all ages today these study results are very encouraging. However, it is important to understand that cancer is a complex disease, with many factors influencing how the cancer tumours advance or are treated. It cannot be claimed at this stage that pineapple can cure cancer.

However, there is strong evidence suggesting that bromelain in pineapple can, under certain conditions, kill off individual cancer cells. While more studies need to be conducted, there is currently enough evidence to suggest that pineapple indeed holds many health benefits and in future could be used in a preventative and treatment role against various types of cancer. In addition, it once again confirms that nature knows best and that fruits such as pineapple can play an important role in maintaining good health and fighting disease.