Why Millet is good for your digestive health 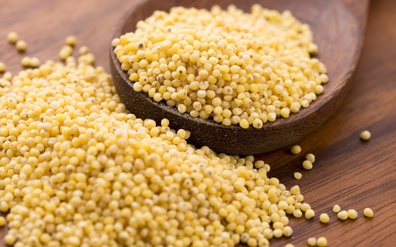 Even though millet has been a food staple for many traditional cultures for centuries, few people living in modern cities have tasted millet, let alone been made aware of its health benefits. Instead millet is often used in bird and animal feed. Yet as people around the world are looking for healthier food alternatives, millet may yet take its rightful place among the healthier grains. The small yellow, pearl-like kernels look similar to mustard seeds or uncooked quinoa, yet they are quite unique in taste and texture. This is the Proso millet most commonly used for human consumption. There are three other types of millet namely: pearl, foxtail and finger millet.

Millet is said to be especially good for your digestive health - Here is why:

Millet is a low glycemic index carbohydrate. It is packed with fibre and contains simple sugars that are easy to digest. According to some studies millet has a resultant effect of lower blood sugar levels than wheat or rice. Millet is considered one of the healthy whole grains that can have a positive effect on treating type 2 diabetes. This is largely due to the coenzymes and minerals such as magnesium that are found in whole grains.

Millet is alkaline and easy to digest. It is also gluten free so is suitable for celiac sufferers and people with gluten intolerance. Millet can be ground as used as flour in gluten free baking. Its neutral flavour will not affect the taste, although for a lighter consistency it is best combined with other gluten free flours.

It provides a lot of antioxidants, is good for your gut and a lot more... It may be considered a SUPERFOOD

Studies have shown millet to have high antioxidant properties. The phenolic compounds found in all types of millet have shown to be antioxidant, metal chelating and reducing. Millet is also reported to act as a prebiotic which feeds the micro flora in your gut. Millet is said to have a hydrating effect on the colon and helps to prevent constipation. Perhaps the Hunza’s that live in the Himalayas were on to something after all. They eat millet as their primary staple food and are known for their longevity and good health.

Previous Who knew Pineapple could be this powerful?
Next Aloe Vera – the wonder plant from Africa