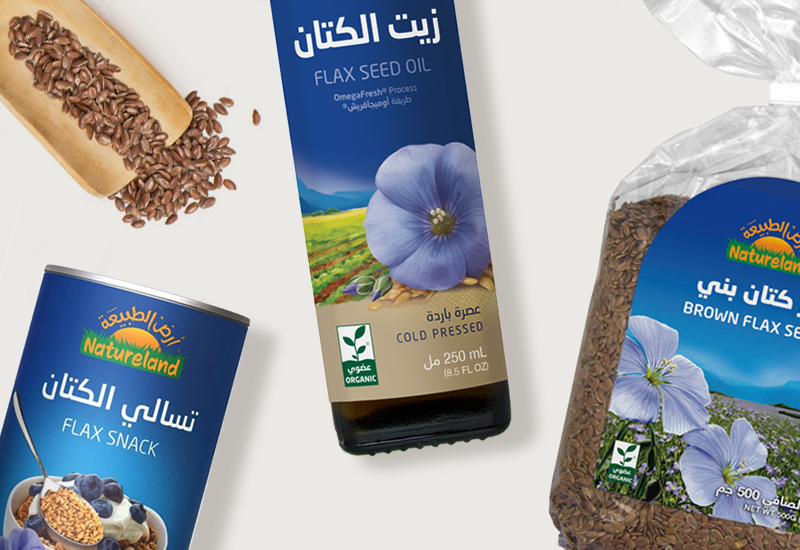 Flaxseeds are a tiny brown seed with a tough outer casing. They are also known as linseeds and are the source of the popular linseed oil that is used to polish and finish furniture. However, flaxseed oil is food grade and very different from industrial linseed oil. Flaxseed has multiple health benefits for humans. Flaxseeds are one of the richest sources of Omega 3’s, primarily in the form of ALA (alphalinolenic acid). They are also high in fibre, anti-oxidants and vitamin B.

Where do Flaxseeds originate from?

Flaxseed has been around for centuries. Archaeological evidence reflects that flaxseed was cultivated in Europe and the Middle East as early as 6000BC. Flaxseed has been found in ancient Egyptian tombs dating back 3500BC and various other sights in south-east Europe dating back 5000BC. In the middle ages it was a valuable trading commodity. Flax stalks were spun into fibres for clothing and linen, while the seeds were used for human and animal consumption. Flax was one of the most important commodities in Europe and the USA until cotton and wool became cheaper to produce in the early 1800’s. Today flax is grown in South America, Japan, USA, Canada, Russia and the Ukraine.

What types of Flaxseeds are there?

There are two types of flaxseeds: brown and golden seeds, although the brown are more commonly what you’ll find on the supermarket shelves. Because of their rarity, golden flaxseeds tend to be more expensive. However, there is little difference in their nutritional value. Flax seeds are best bought and stored in their natural whole form. Flaxseed can also be found as a ground flour or as flaxseed oil. However the oil and flour have a much shorter shelf life and need to be properly stored to avoid going rancid.

Why are Flaxseeds so healthy?

Flaxseeds are a nutritional powerhouse with one of the highest ratios of Omega 3’s. They are also rich in potassium, phosphorous, magnesium and calcium, and contain other essential nutrients such as selenium, sodium, iron, zinc, copper, and manganese. Flaxseed is 66% fats, 12% protein and only 22% carbohydrates which makes then ideal for people on a high fat, low carbohydrate lifestyle. Other essential vitamins found in flaxseed include vitamin B6, niacin, folate, choline, betaine, pantothenic acid, riboflavin, thiamine, as well as vitamin C, E and K.

What foods can Flaxseeds be used as a substitute for?

How to prepare Flaxseeds:

Flaxseeds in their raw natural whole seed form cannot be digested by the body because of the tough outer shell of the seed. Raw, they simply pass through your system, meaning that you do not get the nutritional benefits. The easiest way to use flaxseed is to grind it to a powder. This is easy if you are adding flaxseed to juice or smoothies. Other ways to activate flaxseed are to roast them on moderate heat which cracks open the shell or to sprout them by soaking in water. You can also get the benefits of flaxseed by using flaxseed oil.

How to store Flaxseeds:

For the longest shelf life, flaxseeds are best stored in their whole natural form. Once ground, flax seed needs to be used within a few weeks otherwise the flour can go rancid. Flax oil must be kept cool and away from sunlight. It is best stored in a refrigerator.